I’ve been working on perfecting roasted root vegetables for awhile. Getting them to come out of the oven crispy on the outside and creamy on the inside is no small feat. Should you parboil first? How hot should the oven be? I’ve gone back and forth about the parboiling question. For years, I’ve been too lazy to bother and I thought that I was getting by just fine. That all changed the other day, when I followed the recipe in Jamie Oliver’s latest book, Jamie’s Food Revolution: Rediscover How to Cook Simple, Delicious, Affordable Meals

. He got me to parboil again and I don’t think I will ever go back.

The other revelation? Heat the olive oil, along with the smashed garlic cloves and rosemary in the roasting pan first, on the stove top. Then toss the vegetables in the heated, flavored oil to coat (before roasting in a 400˚F oven). The vegetables roast evenly, and the flavor diffuses throughout.

See the nice browning on the potatoes? That comes as a result of scuffing up the potatoes while draining them in the colander. Scuffing the potatoes increases the surface area exposed to the warm air, shortening the time for moisture to evaporate the starches (sugars) to caramelize and turn brown.

And of course, don’t break the cardinal rule: make sure the vegetables are not overcrowded. Overcrowding in the roasting pan leads to “steaming” which produces limp, soggy vegetables that can’t brown. Make sure there is only one layer of vegetables and adequate space between them. 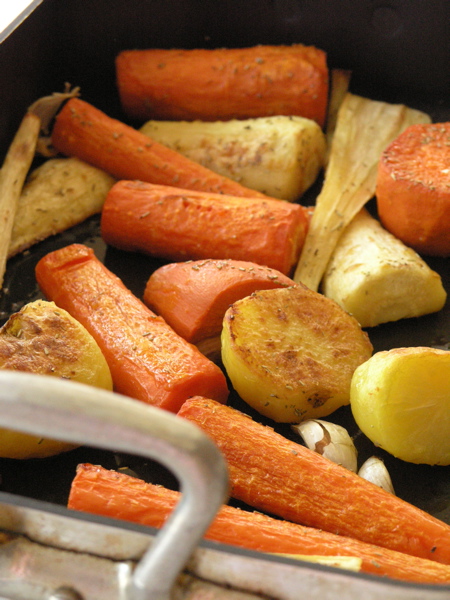 After having dinner with a bunch of friends last weekend, where the conversation centered around health and sustainable eating, my husband decided it was time to make the move towards vegetarianism that had been on his mind for some time. So, while at the public library the next day, I checked out a stack of beautiful vegetarian-leaning cookbooks. One of them was Ivy Manning’s The Adaptable Feast: Satisfying Meals for the Vegetarians, Vegans, and Omnivores at Your Table

. Casting about for a recipe that would use ingredients I had on hand, including potatoes and cheese (always on hand in our household), I found an inspired variation on a tried-and-true favorite: the twice-baked potato.

Since this version calls for potatoes and cabbage, the author, Ivy Manning describes it as the perfect vegetarian option for a St. Patrick’s Day feast. Recently, in her own recipe blog, Ivy’s Feast, she wrote about another twice-baked potato variation that would also be appropriate for St. Patrick’s Day: Twice Baked Irish Potatoes with Kale and Stout Onions. Yum. And she even made a cooking video to boot. See it here:

END_OF_DOCUMENT_TOKEN_TO_BE_REPLACED

I’ve been doing a lot of fattening up of recipes lately and this one is no exception. In fact, I actually adapted this one from a lighter recipe in Cooking Light Five Star Recipes: The Best of 10 Years

. The book was published in 1997 and is out of print, but it’s available on Amazon:

The difference between the recipe in the book and the one I’ve published here is that Cooking Light leave out the extra 1/4 cup of Gruyere that I added and they use 1/4 cup of fat free sour cream instead of 1/4 cup of heavy whipping cream. If I had had sour cream on hand, I would have used it, but to be honest, I had a lot of heavy whipping cream on hand because of the all the garnishes I’ve had to do this week, so I just substituted it in. Their recipe also didn’t call for nutmeg, which I added in because it’s a flavor I love to mix with Gruyere and with pumpkin, so it was a natural addition.

The last difference is that the Cooking Light recipe does not call for baking the mixture in the oven with a little bit more cheese on top. That’s all me.

This is a great side dish, and perhaps a fun addition to a Thanksgiving lineup. It could use a bit more flavor, however. Next time, I might add chives to the ensemble or other fresh herbs. The pumpkin flavor was subtle. You can substitute two cups of canned pumpkin if you don’t have the fresh pumpkin all peeled, deseeded and chopped on hand. I actually did have it on hand because of this crazy pumpkin month I’ve been having.

1. Place potato and raw, fresh pumpkin chunks in a large saucepan; add water to cover and bring to a boil. Cover and cook for 20-30 minutes or until tender; drain.

2. Preheat oven to 375˚F. Combine potato, pumpkin, cheddar cheese, half of the Gruyere cheese, whipping cream and seasonings in a large mixing bowl. Beat at medium speed with an electric mixer until smooth. (You could even pass it through a sieve to make it really smooth). Transfer mixture to an oven proof dish like a Gratin dish and sprinkle remaining Gruyere on top. Bake in oven for 15-20 minutes or until top is golden brown. Let stand for 5-10 minutes before serving.

I think of November as comfort food month, so I thought I’d kick things off by making some beef stew. It’s easy, healthy and relatively affordable. What more could you want?