Last weekend, I decided that my own back-to-school supply should be a new slow-cooker. I had a crock pot already, but I needed something that was larger and more programmable. So I purchased an All-Clad Slow Cooker similar to the one pictured here (and available at Amazon.com). I actually bought the one just larger than this one and it’s huge. I wanted to be able to make entire roasts in it.

Today, I am making one of my favorite slow-cooked dishes: braised lamb shanks. Lamb shanks, with marrow filled bones, and a layer of fat, are perfectly suited for slow-cooking. I think it might be impossible to overcook a lamb shank. The long cooking time simply works to make it extremely tender and falling off the bone.

This version of braised lamb shank is inspired by ossobucco recipes. It includes wine, tomatoes and is finished with a gremolata. Gremolata is a bright, flavorful mixture of lemon zest, parsley and minced fresh garlic. Adding this mixture at the end brightens up the long-cooked dish.

The best thing about the All Clad Slow Cooker is that the insert is stove ready, so you can brown food before setting it to cook for the rest of the day. This is a key step when making braised lamb shanks. I browned these shanks in batches, then added olive oil and onion, sautéeing the onion a bit before replacing the insert to the slow cooker for the rest of the cooking time. 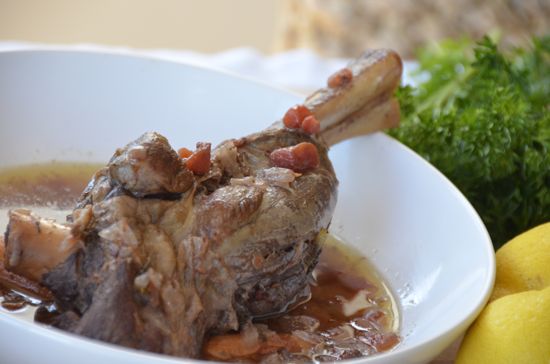 So, why the image from the movie, you ask? Well, it’s just a pun I thought of a long time ago and always wanted to build a recipe around. What are your favorite movie title pun memes? 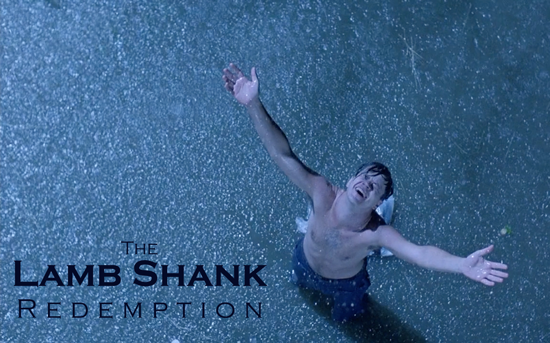 And finally today, this video of Jamie Oliver’s Britain features the tastes of York, which means of course, Yorkshire pudding. There’s also an interesting lamb shank recipe in this video, which draws more heavily on Moroccan flavors. He uses fresh mint instead of fresh parsley and even makes a mint oil to garnish his lamb shanks.

The other great tip he imparts is to use an immersion blender to blend the sauce leftover in the slow cooker once everything is finished cooking. Blend it and then thicken it by simmering it down over the stove. Perfection.

Here’s what you don’t know about Emilio Estevez. In addition to a lifetime of acting in, writing, directing and producing great films, he can now add to his cv the titles of winemaker and master gardener. This is not arm’s length wine-making, where you watch intently while others do all the work. Emilio planted the vines himself right in his own back yard and tends to them avidly. He also planted a vegetable garden for his fiancée Sonja, and together they turn out enough produce to run a small farm stand. When at home (and not out on a Bus Tour promoting his latest film), Emilio can be found each morning out in the garden, weeding the beds, feeding the chickens, or harvesting his latest produce. It is for this reason I thought it fitting to pay tribute to his new film, The Way, by focusing a bit on the food within it.

The Way is a movie that follows four characters as they attempt to walk the Camino de Santiago de Compostela, a 500 mile trek which starts in the French Pyrenées and winds across the North of Spain to the town of Santiago de Compostela in Galicia. It is believed that St. James is buried in the Cathedral there and this pilgrimage dates back a thousand years. Today, tens of thousands walk it, each for a different reason.

In the film, Martin Sheen, Emilio Estevez’s father in real life, plays Tom, an eye doctor from Ventura, whose estranged son Daniel, play by Estevez himself, has just died while hiking the camino alone. Tom must travel to Europe to collect Daniel’s remains, and while there, he decides to complete the pilgrimage for his son and sets out on a life-changing adventure. A highly personal film, Estevez was inspired to write it after his father had trekked a portion of the camino with Emilio’s son, Taylor Estevez. At a screening in San Rafael, CA on August 28, 2011, Estevez explained that his son, Taylor, fell in love with a Spanish girl he met on that trip and 5 years later, just before the start of filming, the two were married. Taylor still lives in Spain and assisted during the filming. Estevez said that he felt he had “lost his son to the camino too,” and felt great empathy for the character he was writing. But he laughed. Taylor accompanied Emilio and Martin on their latest bus tour across America promoting the film – 50 days, 50 cities – a camino of their own, no doubt.

“The Way” is a tender, contemplative film and Martin Sheen’s performance is so vivid and moving. In fact, I was so moved by his emotion during the film, that I asked him afterward, “As an actor, what was it like to contemplate the death of your son, and take yourself there emotionally, all while your son is across the room, behind the camera?” He explained that an actor, “has a toolbox of emotional moments to draw on when they need to go to that place,” and that “you just have to trust that you can walk up to that cliff, and let yourself go and that the performance will be there.” He quickly added, “But my son is an amazing director and he helped draw that performance out of me.” [SPOILER ALERT] “For example, he surprised me. When they pulled back the zipper on the body bag, do you know who it was in there? It was a surprise to me during the scene, but it was his son Taylor in there. So the shock you see on my face is real.”

Despite the tragic premise, this film is not all doom and gloom. There are plenty of laugh-out-loud moments, and many of them take place around a table. The first companion Tom meets is “Joost from Amsterdam”, played by Yorick van Wageningen. Joost has set out on the camino to lose weight, but his first stop? A cheese-maker along the path – and then a café where he must try the local lamb and then the wine. Needless to say, he doesn’t lose any weight on the trip, but through his eyes, we learn some interesting culinary facts. For example, Joost sits down at a cafe during the Navarra leg of the trip and tells Martin Sheen’s character that he is excited to try the “pinchos” here. “Oh no, no!” Tom insists, “In Spain, they are called Tapas.” Joost holds up his guidebook. “It says that in this part of Spain, they are called, “pinchos.” “No way,” retorts Tom. “They are “tapas.” When the waiter approaches, Tom announces with true American bravado, “We are here to try the Tapas.” The waiter explains, entirely in Spanish, says “We do not serve, Tapas. Tapas are found farther south. Here in the North of Spain, we serve “pinchos.”

So, what is the difference?A pincho is similar to a tapa, but is distinguished by the fact that it has a pincho (Spanish for spike), usually a toothpick or skewer, stuck through it, often attaching it to a piece of bread, like in this photo. In the movie, The Way, we also learn that Leg of Lamb is also renowned in the region close to Logroño. The lamb is actually brought to market very young, much younger than in the states. A baby lamb of just 25-30 days is most commonly used in this part of the world. And this brings us to today’s recipe: Cordero is Spanish for lamb. Asado is Spanish for roasted.

Here’s how to make it.

2 quarters of a suckling lamb (or in the US, 1 leg of lamb)
Lard or olive oil for coating the meat
Water
Salt
3 Garlic cloves crushed with a pinch of coarse salt and a little vinegar

2. Smear the skin of the lamb with lard, or butter or olive oil. This will help the skin crisp at the end of the roasting time. Place the leg of lamb in an oval casserole or roasting pan. Add a large glass of water to the pan. Place in the oven and roast for about an hour and half.

3. Halfway through roasting, prepare a garlic paste in a mortar with the garlic cloves, a pinch of salt and a jet (not great) of vinegar. Remove the pan from the oven, and turn over the lamb. Spread the garlic paste over the meat and add a little more water to the roasting pan, if necessary. Return the casserole to the oven and let it finish doing. Eventually the meat will be roasted and crispy on the outside, and very juicy on the inside with sauce on the bottom of the pot or source.

4. In the US, we like to serve this with roasted root vegetables, or potatoes. In Spain, it is recommended that you serve this dish with a simple salad lettuce, tomato, and onion, to allow the lamb to take center stage.

The Way, the movie is now available on DVD. Emilio Estevez and his father Martin Sheen have also collaborated on a Memoir, just released this month. Get them all today on Amazon:

To find out more about the film, visit The Way’s Website.

Day 17 of 31 days of pumpkin. We’re on a roll, people. Yesterday, I made these spicy, savory pumpkin seeds and today we get to coat lamb chops with them and fry them up. I have a confession to make. While I coated lamb chops for me, I coated chicken breast strips for my children. They absolutely loved them. So coat and fry whatever you want. Lamb, chicken… I bet eggplant slices would be great fried this way too.

One of the things that I like about doing these recipes every day is the fact that my kitchen tools are really getting a workout. I like that I’m finally making a dent in my cinnamon, ginger, allspice, cloves and mace collection and that my small appliances are making it out on to the counter. Like this one, my Cuisinart mini-prep, which got a workout today chopping and grinding the roasted pumpkin seeds. 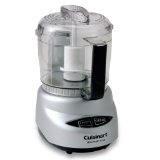