Today I decided it was time to use the mandoline I recently purchased and what better way to give it a test drive than to slice sweet potatoes for home-made chips? I waited a long time before purchasing a mandoline. I had always wanted one, but whenever I saw one in a store, it was too exorbitant. Not so anymore. I purchased my Swissmar Borner V Slicer Plus for only about $40 and I learned today that it works great. Click on the photo to learn more. 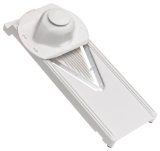 I was inspired to finally purchase a mandoline after reading ZestyCook.com’s post about Healthy Homemade French Fries. In his post (and other posts of his), he recommends soaking the potatoes in salted water for 30 minutes before baking them. It draws the starch out of the potatoes and they crisp better when you cook them. I didn’t have time for that step today, so I skipped it. Later in this post, you’ll learn whether or not the chips got crispy anyway.

Today, I set out to determine whether deep frying the potato slices in olive oil really tastes better than baking them in the oven. So I sliced two batches and pit them against each other.

I heated extra virgin olive oil in a heavy-bottomed, deep frying pan on pretty high heat until it was just starting to smoke. I don’t have an oil thermometer, so I just had to guess that it was an appropriate temperature. While the oil was heating, I sliced the potatoes with my mandoline and salted them.

When the oil was ready, I slid them in carefully. They sizzled right away without splattering, so I knew I had gotten the temperature right. I put in enough slices so that the pan was full but they weren’t touching each other. After about a minute and a half, I used tongs to flip them over. After about another minute and a half, I used tongs to remove them to a plate lined with a paper towel. I sprinkled a little more salt on them and let them cool for a couple of minutes. I also dabbed the top of them with another paper towel.

I preheated my oven to 425˚F. I sprayed a cooking sheet with non-stick cooking spray (Pam) and laid the slices on the sheet about 1/2 inch apart from each other. I then sprayed the slices lightly and salted them as well. I put them in the oven for 5 minutes, then flipped them and put them back in the oven for another 5 minutes. I flipped them again and thought they could use a couple more minutes. Luckily, I checked on them frequently, because once they started to brown, they browned up really quickly. The super-thin slices actually burned, but there were lots of slices that were just right. What amazed me was how much they shrunk!

Taste tests revealed: the baked version was better! It retained more of the sweet flavor that characterizes the garnet yams I used. There wasn’t a huge crunch to them, but there was definitely some crispiness. The fried ones were crispier, but the flavor was not as strong. Maybe the significant shrinkage of the baked ones concentrated the flavors? Next time, I will try soaking the slices in salted water to see if the baked ones can be crispy too. They they just might be perfect.

Other paths to perfection?
Sprinkle the raw slices with:

Any other additions you would suggest?

Thanks for the helpful comparison! I eat sweet potatoes often – love them! I burn the chips so usually cut them into big sticks (1/4 in or so across), toss in olive oil, sprinkle w a tiny bit of brown sugar and a good amount of spicy cajun seasoning. They are also great pre-cooked for a bit in micro, then finished on grill. I also bake them instead of white or gold potatoes. And use them in soups, and … hahaha

[…] making sweet potato chips the other day (see that post here), I decided to use one of the other attachments from my new mandoline and make french fries as […]

This is the fifth recipe I’ve looked at for baked sweet potato chips. The temperatures range from 200 degrees to 450 and the times from five minutes to 80 minutes. I’m trying to find an oil free way of crisping these little dickenses, so I’m going for yours. Wish me luck!

Let me know how it goes! Definitely check on them frequently when they’re baking at that high temperature!

I sliced sweet potatoes with mandoline and put slices in 170 degree oven all day (till 7pm)! About 1 hour before removing I sprayed with olive oil and sea salt and cooked another hour. They are so crispy and good! I’m about to finsh 2 potatoes by myself (the dog helped a little)!

Just finished baking yet another batch of sweet potato chips. After many attempts success for very crispy chips comes from slow baking at 260F for 70 minutes then turned over over and baked for another hour. Once removed from a cookie sheet the chips will crisp. Smoked paprika, brown sugar with cinnamon or chipolte powder pair well with the sweet potatoes. The use of a mandolin is essential for even baking. Thanks for the comparison , I have wondered about the deep-fry method but didn’t want to risk he extra calories.

Thanks for your in-depth trial and analysis! I love the ideas for paprika, brown sugar, cinnamon and chipotle. Genius!