When Mooney Farms contacted me asking if I would be interested in trying out some of their Sun Dried Tomato products, I said, “Yes. Yes!” Shortly after, a goodie box arrived chock full of tantalizing jars and packets. I’m inspired. Stay tuned for more recipes, but today I made Meatloaf with their Sun Dried Tomato Pesto.

Today, I made a recipe that was attached to the top of the jar of the Sun-Dried Tomato Pesto. Man, was it delicious. I don’t normally make meatloaf. My husband doesn’t really eat meat and my kids woud be scared of it in this form. Since they’re not interested, if I’m not careful, I’m going to sit here and eat all 3 lbs of it myself this afternoon. Seriously. It’s that good. If your family likes meatloaf, this is going to be a winner. There is melted Mozzarella on top, no less!

If your market doesn’t carry their products, you can purchase them directly from the Mooney Farms Wesbite. 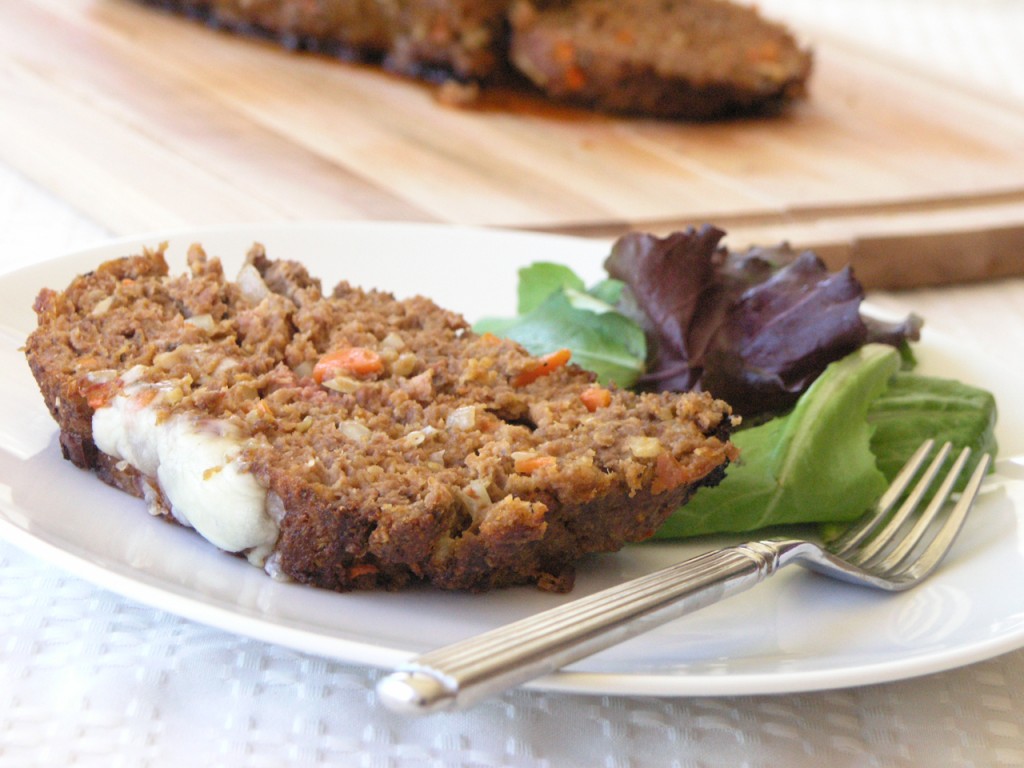 I used Gruyère Cheese on my burger and added sautéed onions and mushrooms. I used 85/15 ground beef to achieve a balance between fat and flavor.

1. Mix the shallots, chervil, tarragon, egg, ground beef, salt and pepper in a large bowl. Form into 4 patties. Heat a grill pan over medium heat. Spray with cooking spray. Add the patties and cook for about 7 minutes on each side, depending on how well done you like your burgers and how hot your pan is. Cover, vented, while cooking.

2. Meanwhile, heat a medium sautée pan over medium heat. Melt the butter and add the onions. Sautée until just starting to soften, about 5 minutes. Add the mushrooms, and continue to sautée until mushrooms sweat out their moisture and start to brown.

3. Add the cheese to burgers and continue to cook, with the vented cover, until cheese has melted. Toast the buns. Prepare the lettuce slices.

4. Assemble the burgers with lettuce on the bottom, burger patty with cheese in the middle and mushrooms and onions on top. Serve immediately.

For a couple of years now, I’ve been trying to master the art of making what those in the UK refer to as “mince.” We call it ground beef. My husband adores mince and tatties (translation: ground beef and mashed potatoes) and his mother makes it better than anyone I know. Here, I’m going to go ahead and put the mince and tatties (and carrots and onions) together into a Shepherd’s Pie, but the mince preparation can stand on its own – if it is as good as my mother-in-law’s of course. Her mince has so much flavor and is so finely crumbled. It just melts in your mouth. I’ve asked her what the secret is again and again. Preparing it is so second nature to her, she’s not sure exactly what I’m getting at. But after years of trying to absorb the knowledge,

These are the tips I’ve been able to glean:

1) Drain the fat after the initial browning of the ground beef.
It seems counter-intuitive, like draining the fat would get rid of the yummy flavor, but in this preparation, flavor is enhanced by an OXO cube and lots of simmering time, which brings me to tip #2

2) After draining the fat, return the browned ground beef to the pot, add a little water and an OXO cube, mix it all up and let it simmer for 20 minutest to half an hour.
The flavor intensifies and the extra simmering time breaks down the beef bits further so you get a finer consistency.

What is the origin of meat pies, you ask? Well, back before there was refrigeration, covering the meat with a crust helped prevent spoilage. When the potato became popular in Britain in the mid-1800’s, a mashed potato topping presented an alternative to the pastry one.

1. In a stockpot over medium-high heat, add olive oil and melt 1 Tbsp of butter. Add ground beef and break up into little pieces while it is cooking. Brown for about 10 minutes, continuously breaking it into smaller bits and stirring it. Drain the beef through a colander (don’t forget to put a pan underneath to catch the drippings)! Return the beef to the pot and add 1/2 cup of water and one OXO beef bouillon cube. Break up the cube and stir it in until it is completely dissolved and incorporated. Cover and reduce heat and simmer for 20 minutes.

2. Bring 2 quarts of water to a boil in a large stockpot and add the potato. Boil for about 20 minutes or until fork tender, but not mushy.

3. While the meat is simmering and the potatoes are boiling, heat 1 Tbsp of butter in a medium skillet over medium-high heat. Add the shallots and sautée until softened, about 3 minutes. Add the carrots and continue to sautée until onions are browning, carrots are softened and starting to brown, about 4-5 more minutes.

5. Mash the potatoes with 1/2 cup of milk, adding the milk gradually, until potatoes have reached smooth consistency. Stir in shredded cheddar cheese.

6. In a dutch oven or a shallow, but not-too-shallow baking dish, spread the meat evenly on the bottom. Then spread potatoes evenly on top. Score the top of the potatoes for better browning and crispiness. Drizzle 1 1/2 Tbsp of melted butter on top. Add just a bit of the shredded cheddar cheese on top as well.

7. Bake in 400˚F oven for 30 minutes or until bubbly. Remove and let stand for a couple of minutes before serving.